Choose and buy a Guitar - A beginners guide to the Guitar.

The guitar is one of the most popular musical instruments there is, appealing to both the young and the not so young and spanning different musical genre's such as blues, pop, rock, classical and many more.

So, Im guessing you want to learn about the guitar, maybe you want to take it up as a hobby or maybe your just interested, whatever your motive is, this article is for you. Now, I'm not an expert (but who is, were always learning right?) but I do love everything about guitars from the way they sound to their design and their history, so I'm now going to share my knowledge with you. Its not supposed to be a full indepth guide to everything that there is to know about guitars, but specifically a beginners guide or a blaggers guide!

Guitars come in various shapes and forms, but the 3 main ones are:

- The acoustic: Probably the most recognisable guitar there is, used in all types of music from folk, blues & pop.

- The electric: This guitar is used more in rock and heavy metal but also in pop and blues music. It is very popular and is synonymous with legendary guitar players such as Slash, Eric Clapton amongst many many many more!

- Classical guitar: Used more in playing classical styles of music where the notes are generally picked individually using the finger nails of the player or with finger picks. (Picks are made of plastic and fit on the end of the players fingers to mimic a finger nail) (Not to be confused with a standard pick which is flat and kind of heart shaped, which is used to pick the strings on acoustic and electric guitars, although you don't have to use a pick at all!)

There are other styles of guitars such as steel lap guitars which are used in country music amongst other styles, but we are going to concentrate on the main 3 popular guitars listed above, mainly the acoustic, electric and classical.

This is a diagram showing the main parts of a guitar, the acoustic and classical guitars have the same parts, but without the: pickups, volume & tone controls, Toggle switch & tail piece it will also have a sound hole in the centre of the body. 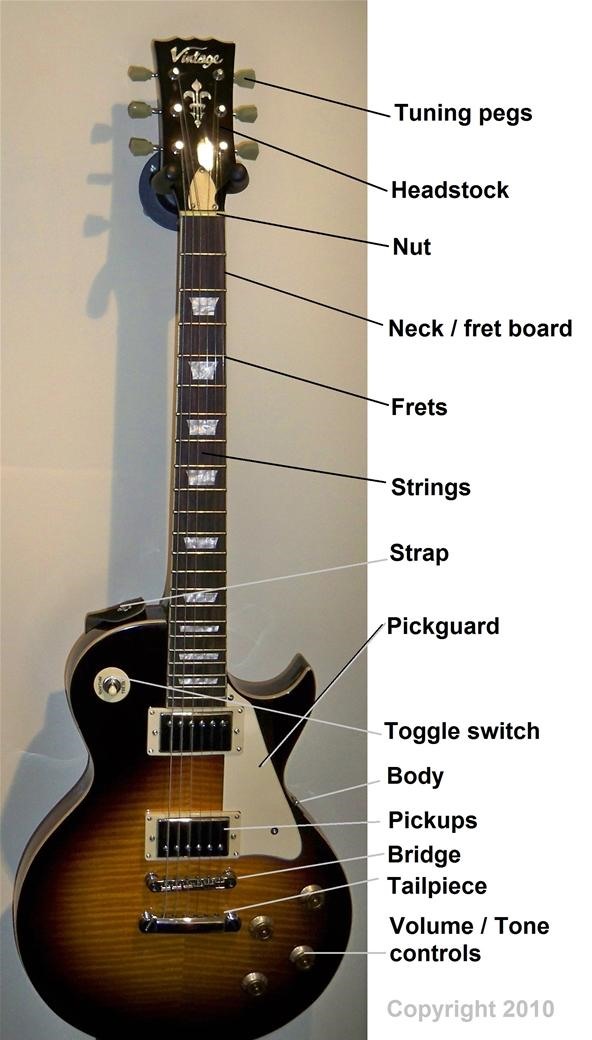 The acoustic guitar is larger than the electric as it is hollow, with a neck which has the frets on it,(frets are pieces of metal sunk into the neck, when the strings are pressed against them at different parts of the neck, they produce different notes) the main body which has the sound hole in the centre and the headstock which has the tuners on it for tuning the strings which are steel. Various woods are used in the construction including, spruce, mahogany, nato etc the acoustic is designed to be played anywhere as the sound created by strumming the strings is produced from the sound hole and is magnified by the hollow construction of the guitar.

The electric guitar is, as I've mentioned earlier, thinner but heavier as its made of solid wood and isn't hollow like the acoustic. The strings are steel again and they are used more for rock and heavy metal playing styles but can also be used in blues and pop amongst others. They are designed to be played by plugging them into an guitar amp (This is an electronic device which amplify's the signal from the guitar strings so it can be heard) it has the same parts as the acoustic, but a totally different construction. Specifically a solid body, neck and headstock. You can actually play an electric without an amp, which is ideal for practising, but the sound is very quiet and really needs an amp to be heard properly. You can also plug the guitar through a special effects device such as a POD or ZOOM (Types of guitar effects products) and then into the amp, which gives the guitar different sounds.

Myth buster: There are some that say the electric guitar is easier to play than the acoustic guitar, this is completely wrong, these people don't know very much about guitars in my opinion ( Its a kind of a misguided snobby attitude I believe, believing an acoustic sound to be purer maybe) it's the same instrument, so it obviously cant be any easier to play. It does require a slightly lighter touch as the strings are nearer to the fret board (The name given to the face of the neck with the frets on it, where the strings sit) than the acoustic or classical whose strings are further away from the fretboard and therefore require slightly more pressure to play, I think this is where some people get a bit confused. Its usually played faster and the notes picked individually more so than an acoustic, so if anything it could actually be harder to play.

The classical guitar is again hollow like the acoustic and has the same parts, body, neck, and headstock with tuners on (Tuners can be turned to tighten or loosen the strings to tune them to the correct note). This type of guitar is used more for picking the notes rather than strumming (although you can obviously do that as well) with the players finger tips or finger picks. It can be used to play any style, but it is usually classical music that it is associated with. The strings are made of nylon, unlike the acoustic and electric which have steel strings. The classical guitar gives a more mellow softer tone than the acoustic and electric and is ideally suited to classical music. The strings are also easier on the fingers as their softer than steel, but that does not make it any easier to play!

If your a beginner (which you probably are if your reading this) a cheap and cheerful would be ideal for you, after all you don't want to go and spend £500 and up on a guitar which you may end up not liking and giving up.

The difference in guitars and their prices may not be obvious at first. Why would you pay £500 ($1000) on guitar when you can buy one for £60 ($90)? The difference is in the materials of which it is made and the brand name of the guitar, for example: A cheap guitar will be made of cheaper woods and are usually laminated woods (Thin slices of cheaper woods which are glued together to make one piece), this is much cheaper than using say a solid piece of mahogany to make a guitar, also there maybe plastic tuning pegs instead of metal.

The brand name is also a factor in the price. If you buy a nameless guitar or a cheaper brand name the price will be lower than if you buy a "Big brand name" guitar such as Gibson, Fender, Yamaha Martin etc etc, you will pay more for these brands as you are buying into that brand and what it represents eg, quality, players which have played them and their bands amongst other attributes.

Although it's important to point out that you don't have to pay a lot of money for a guitar to get a good one and be a good player, plenty of people own top end expensive guitars and cant play them or very well at least! Go around your local music stores and try a few out, pick the one which you like the sound and feel of, remember not all guitars are the same, even in the same price range.

And finally practice, practice and more practice whenever you can!

I hope you have enjoyed reading this article and will hopefully have learned enough to help you make your decision and be inspired into taking up the guitar. It will be a skill that will enhance your life, make you new friends and give you a skill that will be with you through out your life!

Want to master Microsoft Excel and take your work-from-home job prospects to the next level? Jump-start your career with our Premium A-to-Z Microsoft Excel Training Bundle from the new Gadget Hacks Shop and get lifetime access to more than 40 hours of Basic to Advanced instruction on functions, formula, tools, and more.

Other worthwhile deals to check out:

Join the Next Reality AR Community

Get the latest in AR — delivered straight to your inbox.

very helpful, am lookin forward to buying my 1st guitar in a few days!